A medical college offers graduate degree Bachelor of Medicine and Bachelor of Surgery (MBBS). Only institutions offering MBBS course in its curriculum are referred to as a Medical Colleges.

MBBS admissions are not centralised. The admission requirements differ across universities. Generally, students who attain higher marks in the qualifying examinations and in the Medical Entrance examinations conducted by various agencies are accepted onto the MBBS course.

Professionals holding MBBS, BDS, BAMS BNYS, BUMS, BSMS, BHMS Degrees are referred to by the title of “Doctor” and use the prefix “Dr”.

I (First) MBBS – 1 year
The pre-clinical course consists of Anatomy, Physiology and Biochemistry, and these are the basic subjects of medical students and it lasts for a year

II (Second) MBBS – 1. 5 years
Pathology, Pharmacology, Microbiology, and Forensic Medicine for one and half years.

III (Final) MBBS – Part I – 1 year
Part I consists of one year, where Social and Preventive Medicine (Community Medicine), Ear Nose and Throat and Ophthalmology form the core subjects.

On passing the final MBBS examination, a candidate is awarded provisional registration by the MCI or the State medical council and can start the internship. Permanent registration (license to practice) and the final Medical degree (i.e., MBBS) is given only after successful and satisfactory completion of the Compulsory Rotatory Resident Internship, also called the CRRI.

Internship – 1 year
After successful completion of the MBBS course, one has to compulsorily work in the hospital attached to the medical college or in any other approved hospital allowed in some medical colleges, for a period of one year.

Objective:
The objective of opening of ITI is provide technical manpower to industries. These persons are trained in basic skills required to do jobs of say operator or a craftsman.

Eligibility:
Normally a person who has passed 10 standard (SSC or SSLC) are eligible for admission to ITI.

Duration:
The course in ITI is designed in way to impart basic skill in the trade specified. The duration of course may vary from one year to three years depending upon trade opted.

After completion of desired period of training the person is eligible to appear in the AITT ( All India Trade Test ) conducted by NCVT( National Council for Vocational training ).
After passing AITT, the person is awarded NATIONAL TRADE CERTIFICATE (NTC)in concerning trade by NCVT.

Choose Your ITI Course from this List of 50 Best ITI Courses listed here.

Below is list of career options after 12th commerce

Comparison of BBA,BBM, BBS and BMS

To join National Defense Academy a candidate must appear in the entrance exam conducted by Union Public Service Commission, New Delhi, twice a year. The Union Public Service Commission is solely responsible for issuing guidelines for selection and the final conduct of the entrance examination. Minimum Educational Qualification is 12th Class pass in 10+2 Pattern.

There will be 2 papers in NDA (National defence academy) and National Academy (NA) written exam. The papers in all the subjects will consist of objective type questions only. The question papers of Mathematics & Part B of General Ability Test will be set bilingually in Hindi as well as English. Time duration for each paper is 2 ½ Hours . Subjects & Maximum Marks details mentioned below.

Intelligence and Personality Test:
The SSB procedure consists of two stage Selection process-stage I and stage II. Only those candidates who clear the stage I are permitted to appear for stage II.

The details are :
a. Stage I comprises of Officer Intelligence Rating (OIR) tests are Picture Perception Description Test (PP&DT). The candidates will be shortlisted based on combination of performance in QIR Test and PP and DT.
b. Stage II Comprises of Interview, Group Testing Officer Tasks, Psychology Tests and the Conference. These tests are conducted over 4 days.

The personality of a candidate is assessed by three different assessors viz. the Interviewing Officer (IO), Group Testing Officer (GTO)and the Psychologist. There are no separate weight-age for each test. The marks are allotted by assessors only after taking into consideration the performance of the candidate holistically in all the test. In addition, marks for Conference are also allotted based on the initial performance of the candidate in the three techniques and decision of the Board. All these have equal weight-age. The various tests of IO, GTO and Psych are designed to bring out the presence/ absence of Officer like Qualities and their train-ability in a candidate. Accordingly candidates are Recommended or Not Recommended at the SSB.

N.B: Air force given pilot aptitude test only once for the candidate’s .The test selected candidates will go to every subsequent Interview.

How to apply for NDA Upsc exam:

Candidates are required to apply online by using the website www.upsconline.nic.in

The eligible candidates shall be issued an e-Admit Card three weeks before the commencement of the examination. The e-Admit Card will be made available on the UPSC website (www.upsc.gov.in) for being downloaded by candidates. No Admit Card will be sent by post. All the applicants are required to provide valid & active e-mail i.d. while filling up online application form as the Commission may use electronic mode for contacting them.

After Selection at the National Defence Academy, Pune

The selected candidates for the three services, viz, Army, Navy and Airforce are given preliminary training in both academic and physical for a period of 3 Years at the National Defence Academy which is an Inter-Service Institution. The training during the first two and half years is common to the cadets of three wings. The cadets on passing out will be awarded B.Sc./B.Sc.(Computer)/BA. Degree from Jawaharlal Nehru University, Delhi.

On passing out from the National Defence Academy:

The Naval cadets are selected for the Executive Branch of the Navy, on passing out from the National Defence Academy and are given further training at Indian Naval Academy, Ezhimala for a period of one year on successful completion of which they are promoted to the rank of Sub Lieutenants.

Air Force Cadets receive flying training for a period of 1½ years. However, at the end of 1 year of training they are given provisional Commission in the rank of Flying Officer. After successful completion of further training of six months they are absorbed as permanent commissioned officers on probation for a period of one year.

Gentlemen Cadets during the entire duration of training in Service Academies i.e. during training period at IMA shall be entitled to stipend of Rs 21,000/- p.m.

Sainik School, Satara is situated at Satara City, on Pune-Banglore highway. It was the first Sainik School amongst a chain of 24 such schools established in the country. Sainik School, Satara was founded on 23 Jun 1961. through the visionary efforts of Shri Yashwantrao Chavan, the Chief Minister of Maharashtra State. It was inaugurated by the Defence Minister of India, Shri V K Krishna Menon with the aim of preparing boys academically, mentally and physically for entry into the National Defence Academy and other Defence Academies, who hail from financially weaker sections of the society and thereby removing the regional imbalance for such entries in the Armed Forces.

Sainik School Satara is affiliated to the Central Board of Secondary Education (CBSE), New Delhi and is also active member of the Indian Public School’s Conference. In class twelve the Cadets have to appear twice in the Union Public Service Commission examination for entry into the National Defence Academy.

Admissions in Sainik School Satara are meant for boys only. The entrance examination is held for admission to class VI & IX. Boys who are between the age of 10-11 years and 13-14 years respectively on 1st July of the year in which admission is sought are eligible to take the examination. For admission to class IX, the boys should be studying in class VIII in a recognized school. Admissions are made strictly in order of merit only in classes VI and IX.

15% of the available seats are reserved for Schedule Caste candidates and 7.5% for Schedule Tribe candidates. 25% of the balance seats are reserved for the children of serving and retired defence personnel. The remaining seats are filled up by open category candidates based on the order of merit.
The application form, prospectus and sample question papers are made available by Sainik School Satara in the months of October and November.

There are various ways to check the CBSE class 12 results. Here are a few of them:
1) As always, the results will available on the following websites:

2) The CBSE also introduced digital marksheets this year which will be provided to the students through www.digilocker.com .

Courses and Career options after B.Com

These are some courses that you can pursue after B com:

CA
One of the most common careers that cross every commerce student’s mind is CA. The Chartered Accountancy course is conducted by the Institute of Chartered Accountants of India (www.icai.org) and requires one to clear 3 Examinations over the period of time

Articleship :
The students after clearing Group I of IPCC is required to register for Articleship with experienced CAs for a period of 2.5 – 3 years.

Those aspiring to be Chartered Financial Analysts need to register themselves with ICFAI. It is a must that the candidate applying should be a graduate. Postgraduates are also allowed to apply for  the course. The candidate is allowed to register any time of the year. There is no minimum marks required as part of the eligibility criteria. Even candidates who are in their final year can also apply for the course.

There are 3 levels:
Foundation,
Intermediate and
Final examinations and
three years of practical training

Stages to become a Company Secretary:

The student who would like to join the Course after 10+2 pass or equivalent has to undergo three stages to pursue the Company Secretaries Course:

Foundation Programme which is of eight months duration can be pursued by 10+2 pass or equivalent students of Arts, Science or Commerce stream (Excluding Fine Arts)

After Graduation
The Student who would like to join the Course after passing the Graduation has to undergo two stages of the Company Secretaryship:

Student has to go 15 months of practical training which may opt after passing the executive program.

After completion of professional course and 15 months training student will joined as Associate Member of the ICSI and called as Associate company secretary (ACS).

Admission to this CS course is open throughout the year. Examinations are held twice a year in June & December.

In India students follow one of the below streams:

Students mostly follow science stream to become Engineer, doctor. There are lot of career options available in India but students are not aware about it.

Below is chart of different career options: 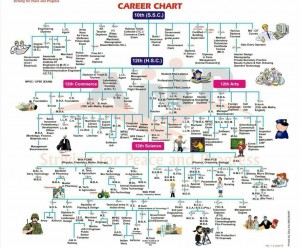 Details to be followed