Ashtavinayak means 8 ganpatis and they are located in Maharshtra near Pune region. All the eight ganpati idols are believed to be swayambhu i.e., self originated. Each temple has its own history.

Ashtavinayak darshan from pune total distance:
The total Ashtavinayak tour distance from Pune comes to around 650 – 700 KM.If you plan to visit temples in their religious sequence then distance will be more.It is believed to be for completion of Ashtavinayak Yatra visit the first ganpati after visiting all the eight ganpati’s again, to complete the yatra. 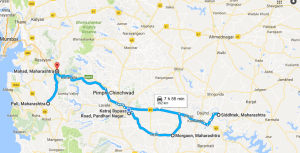 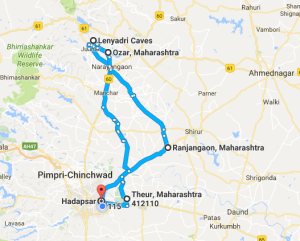 Ashtavinayak yatra Shortest route from Pune:
Day One: Start from Pune
1. The Moreshwar Temple, Moregaon
2. The Siddhivinayak Temple, Siddhatek
3. The Mahaganapati Temple, Ranjangaon
4. The Chintamani Temple, Theur
You can come back to Pune
255 km 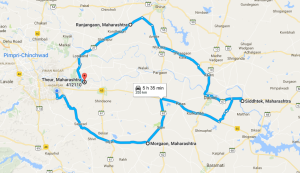 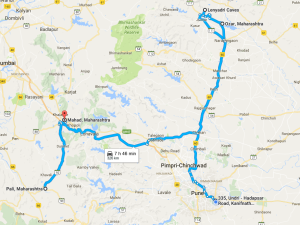 Things to remember:
Some Temple trust provides lunch from 12 noon to 2 noon at nominal cost.
You can stay near temple at Bhakta Nivas at nominal cost. Best Bhakta Nivas is at Ozar. It is besides river and has great view.
Girijatmaj temple, lenydri is administered by central government which closes at 6.30 in evening. Varadavinayak temple at Mahad is always open. Other temples close at 10 pm.
Girijatmaj temple, lenydri is in the mountains. It has 350 steps. It takes more than an hour to climb and get down. (total 1 hour 15 minutes).
To avoid traffic and to reach temples on time. It is better to start your journey early in the morning.