Ganpati festival was started by Lokmanya Bal Gangadar Tilak in Pune, Maharshtra(“Sarvajanik Ganeshotsav”). His idea behind it was to unite people and strengthen the patriotic fervor in Indians. Ganesh Utsav is now celebrated not only in India but all over world.

5 Manache Ganpati:
Pune City is well know for celebration of Ganpati festival with different decorations(Halta dekhava’s) in front of Ganpati. Everyone is aware of Dagdusheet ganpati however many are unaware of 5 Manache ganpatis in Pune which have important place in the minds of the devotees. Dagdusheet ganpati is not included in that list.

So we are describing below 5 Manache Ganpati in Pune which you must visit for sure.

Kasba Ganpati:
An idol of Lord Ganesha was found near the house of Vinayak Thakar, who used to reside close to the residence of Masaheb Jijabai Bhosale.

The temple was built by Shivaji Maharaj & Jijabai Bhosale
in the year 1638.The immersion process on Anath chaturdashi starts with this Ganpati.

Tambdi Jogeshwari is 2nd respected ganpati in Pune.Here the specialty is that, the statue of Lord Ganesha is immersed every year at the end of Ganesotsav and re-established again in the successive year.

Guruji Talim is the 3rd respected Ganapati in Pune. It was first established in 1887 by two Hindu & Muslim families of Bhiku Shinde and Ustaad Nalban. This is the reason why Guruji Talim symbolizes Hindu-Muslim unity in Pune.

Kesariwada Ganapati
Kesariwada Ganapati is the 5th respected Ganapati in Pune. Since its inception in 1894, the Kesari Trust’s Ganesh festival used to be organised at Vinchurkar Wada, off Kumthekar Road, which was then the ancestral home of the Tilaks. Then in 1905, it was shifted to Gaikwad Wada, presently known as Kesariwada.

Most popular Ganpati in Pune:

Dagdusheth Ganpati is one of the most popular Ganpati idols in the city. It is known for “Navsala Pavnara Ganpati”
It is famous for being the richest Ganesha of Pune and has existed since 1893. This temple is visited by thousands of devotees every year which also includes many famous personalities.

Below is the map for your reference to visit this Ganpati mandals especially during Ganpati festivals: 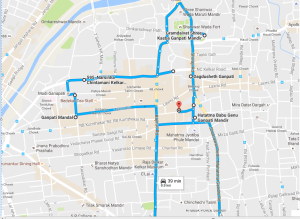